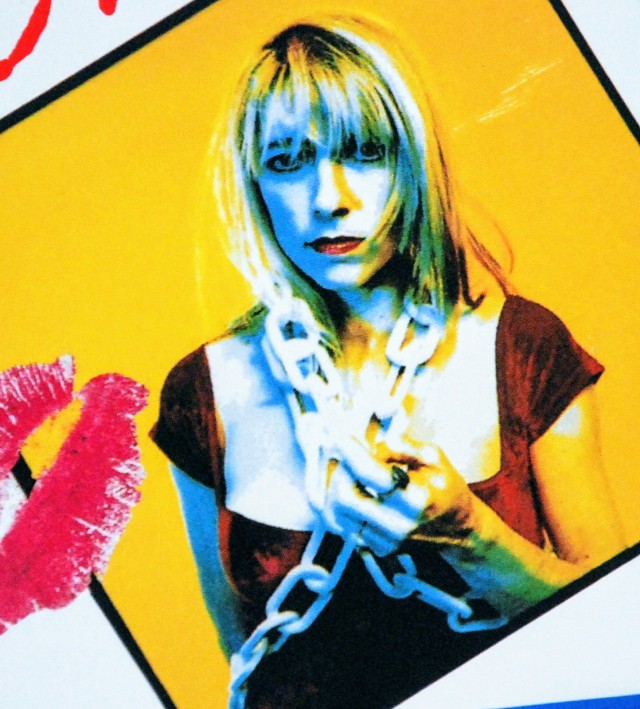 One of the tricks I use to fight off potential Alzheimer’s is to chant the names of every member of Sonic Youth. This might sound completely ridiculous, which it is, but it’s a mantra that keeps me in check, something I do like casting a spell. For whatever reason, I believe in it. Lee Ranaldo. Steve Shelley. Thurston Moore. Kim Gordon. Lee Ranaldo. Steve Shelley. Thurston Moore. Kim Gordon. Lee Ranaldo. Steve… and so on. While other people play Suduko, do crosswords, and memorise lists, I’ve use the power of Sonic Youth to keep my brain nimble. Somehow, their names clash in my head, all those consonants make it a tongue twister. It makes profound sense to me that together, they made imponderable music, if that’s what you could call some of the noise they put down on vinyl. For me, however, the most impressive member of Sonic Youth will always be Kim Gordon. I admire people who live their art and breathe their doctrine. Kim Gordon was an early proponent of Madonna, defending her before critics learned to relax and love Ms Ciccone and her Danceteria infused pop music. Her early punk days in a No Wave band aside, Madonna always held a fascination for Kim and Thurston. They would play tapes of her songs during soundcheck, a move taken as irony, when in fact Kim Gordon deeply admired The Queen of Pop as a symbol of feminist power who used sex and sexuality in her work. Kim, meanwhile, had to suffer the indignity of being asked the dreaded question that every male journalist asks a girl in a band: How does it feel being a girl in a band?

Sonic Youth were darlings of the underground, but they were other things too. Above all, they were smart. They networked, got their albums released on the hippest labels, which gave them kudos. While the labels helped and hindered, the band’s visuals created a mystique, their low-fi aesthetic being deployed as part of their process. But there comes a time in the career of every underground band when they need to make a very important decision. They need to decide if they’re going to try and embrace the mainstream or not. Do they conform to deform? Bring their values to a mass audience and make some money at the same time? Sonic Youth did exactly that and when I first watched Kool Thing on MTV, I was immediately transfixed by her and that voice, a spoken word, I’m too cool to sing properly utterance. A serious band, the accompanying booklet in Goo (which Kool Thing was taken from) shows the members of Sonic Youth in seventies ghetto fabulous glam. They’re taking the piss, of course. But they also looked very cool, or Kool. Even the video was thoughtful, but obviously gave the feeling of nonchalance. Kim Althea Gordon looked like a fucking superstar, which is exactly what she is. Her original intention was to wear a beret and carry an Uzi, taking on Patty Hearst’s likeness, but of course this was vetoed by Geffen Records. What I didn’t know was that the video was also a parody of an LL Cool J video. They can be watched and compared here and here. Kim actually interviewed LL Cool J, whose machismo made things slightly awkward. Better still, Kim gave him a copy of The White Album, which was her side project under the name Ciccone Youth. Guess where I got my name from?

Kim Gordon gets it. She embraces new talent instead of fearing it, even making use of Sassy, the ’90s teen magazine for American girls that put Juliana Hatfield on the cover. Cool and alternative, it immediately found an ally in Kim, who appeared in its pages, both as a writer and model. She designed clothes, starting a fashion label, doing all the things that every celebrity does now. When Riot Grrl happened, Kim Gordon was held up as an inspiration. Later, after her divorce from Thurston and the subsequent break-up of Sonic Youth, Kim became even greater. Her autobiography “Girl In A Band” doesn’t always make for cozy reading, but my goodness don’t you just get a sense of who she is from it?

But who is she? A girl in a band, a mother, an icon, a sister, a singer, an artist, an inspiration. She’s all of those things. For me personally, she’s a touchstone for everything that’s decent about pursuing your art with dignity and truthfulness. There’s a real integrity in anything Kim Gordon does, and ultimately that’s the reason she means so much to me.