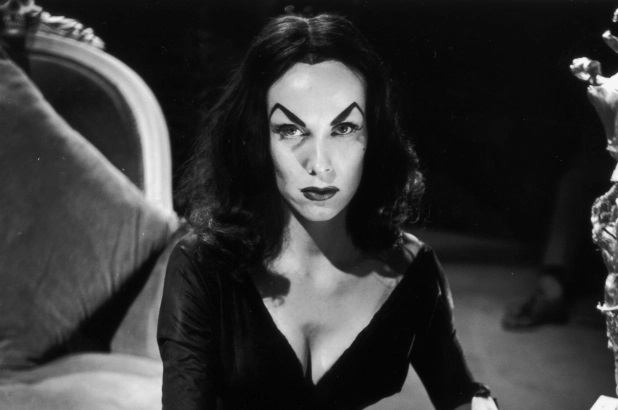 Vampira exists in a few clips and the hearts of her fans, who have kept her memory alive for decades. When I think of Vampira, usually around the end of October every year, I wonder if she knew her work was pioneering. Everything about her perfectly summed up the time, yet sent it up as well. What I find most surprising about Vampira and her legacy is that her TV show only lasted a year, just like her initial fame. So her enduring power is all the more unexpected, in hindsight.

Vampira, in reality actress and bondage model Maila Nurmi, came about by chance. Trying to make it in 1940s Hollywood, one rumour has it that Mae West eliminated her from a role in her play Catherine Was Great because she feared Maila’s star power. Years of trying and failing to find fame, and it turned out to be a fancy dress ball that changed Maila’s life – and identity – forever. Dressed as Morticia Addams, Maila was the belle of the ball, a spooky siren who turned heads in her tight dress and pale bloodless skin. Hunt Stromberg Jr, a producer, was looking for a host to front some horror movies his network was showing. He saw Maila, but more importantly, he saw something in her that persuaded him she was the right ghoul for the job. But Maila was no dumb starlet: she had ideas and concepts she wanted to try out on television. What she didn’t have was a name for this character. Finally, it came thanks to her husband, who suggested Vampira. Influenced by the evil queen from Snow White, Maila threw other disparate elements into the mix, pulling from the gothic and strange. But she had something else in mind as well, a final ingredient: humour. Vampira would subversively send up the fifties’ housewife, the cocktail-making happy home-maker – and in the process, create the classic lineage of horror hosts that continues to this day.

Each episode started the same: a gloomy corridor thick with fog, then Vampira walking slowly towards the camera. The film would officially commence with a scream, and Vampira could scream louder and more stylishly than anyone else. A cultural icon was born and Vampira continued this for a year until her show was cancelled by KABC-TV. Canny enough to keep the rights to her character, Maila would be Vampira on other stations, guest starring on TV shows. Most famously, she appeared in Plan 9 From Outer Space, being the best thing about the film. Ed Wood, for all his faults, clearly knew an icon when he saw one. This movie (if it could be called such) is one of the reasons why so many people know Vampira, giving her eternal life in pop culture. What a twist.

Her show being broadcast live, very little footage exists. Yet decades later, Vampira’s influence looms large. She’s a fashion icon, beloved by alternative cultures, a horror host idol, punk symbol, and drag inspiration. Years after Maila’s death, events are held in her honour worldwide. Horror hosts converge to celebrate their art, meaning Vampira is never too far away from discussion. Her Instagram account has eighty-five thousand followers. Not bad for an undead glamour ghoul. Vampira’s longevity has continued after death, the great marker of a true pop culture icon. Somehow, I think she’d be delighted to see the world finally catching up with her vision, the impact she created when she walked down a foggy path and screamed, her charisma and genius seized by a camera and hurled out across television sets all over America, eventually the world. I love Vampira because she remembered to be funny and silly and completely preposterous. She took the piss out of the conventions of horror. She mocked American attitudes by being Vampira. But she never mocked her audience, treating fans with respect, playing up Vampira. Why? I like to think they saw in her what she saw in them: strange people looking for home, a safe place to be, even if that meant an hour in a Transylvania castle, a UFO full of monstrous creatures with ray guns, or somewhere else that only exists in a black and white b-movie.