First Album by Miss Kittin And The Hacker

If I had to choose a handful of albums that I needed, actually couldn’t live without, during a bizarre epidemic then surely one of those albums would be the quietly seminial First Album by Miss Kittin And The Hacker. We all have albums that never leave our iPods. This album is one of those, forever remaining on every iPod I’ve ever owned, will ever own. I can’t remember life before this record. It came during a period of time when major underground scenes were penetrating the mainstream in their own little ways. Electroclash and a rock revival came hand in hand, but not together. The Strokes were New York and Electroclash was spiritually of Berlin, but many of the acts involved in both scenes were from all over the world. Miss Kittin and The Hacker came from France and Switzerland but indisputably created *the* defining Electroclash record. I loved Electroclash. It was fun, arch, stylish, and sexy. Miss Kittin, also involved in *the* other definining Electroclash album (Kittenz And Thee Glitz with Felix Da Housecat) spoke over beats in a her deadpan, quite droll delivery. She could recite your junk mail and still sound completely enthalling. The album is crammed with retro and techno beats, some lo-fi others slightly more complex. Made in the ’90s, First Album is cool and ironic, as you’d expect of that era. Tracks from this album became Electroclash anthems. The first and most famous being Frank Sinatra. I first heard it after reading about the song in a magazine. I can’t remember which, but during that time I was consuming lifestyle and fashion magazines, having stopped reading Kerrang. There were so many to choose from on shelves! A real boom in publishing was happening, a reinvigoration of pop culture. We had Sleazenation and Musik and I-D and Dazed. They were supporters of Electroclash and that meant Miss Kittin and The Hacker popped up in the pages. Bands and artists with names like Electrocute, Peaches, Princess Superstar, Fischerspooner, Ladytron, DJ Hell, Mount Sims…oh, they all seemed so cool to me. I wanted to go to Optimo even though I hated night clubs. I did. I hated it but felt somehow part of something bigger than myself. Anyway, I heard Frank Sinatra and I’m in love with the song, but what really sold it was:

I knew The Strokes could never compete with Miss Kittin and The Hacker, so I threw my lot in with Electroclash. Don’t get me wrong, I still listened to bands like The Hives (pure fun) and LCD Soundsystem, who seemed to bridge the gap between rock and electroclash. I listened to this album religiously. Then I noticed it infiltrating mainstream pop music. Kylie’s Slow. Holly Valance’s State of Mind. Both could be on this album or Kittenz And The Glitz. 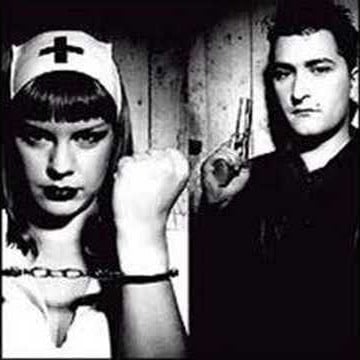 1982. Life on MTV. Slow Track. The Beach. They summed up my style, my taste, my aspirations. I still love them and this album. Cutting it out of my iPod would be like cutting off a limb. Sometimes you can come to love certain albums (or books or movies) that without them you don’t feel complete. For me, The First Album is something to love forever.