The Future Of War by Atari Teenage Riot

Years before Prodigy released their seminal Fat Of The Land, there was Atari Teenage Riot making a racket with their acerbic digital punk. The Future of War, their second album, was the logical conclusion of the futuristic fusion of aggressive guitar riffs and skull-caving beats. Atari Teenage Riot’s original incarnation – Alec Empire, Hanin Elias, and Carl Crack – were unlike anything else in your CD collection. Later, their descendants came forward. Prodigy (as mentioned), Fear Factory, Static-X, Lolita Storm, Death Grips, Crystal Castles and many others followed in their trail. Some good, some not so good. But none of the aforementioned bands released anything quite as relentless as The Future of War. It was a pivotal album for Atari Teenage Riot, the album every band makes when the odds are in their favour. The sound was right. The lineup was right. The politics, however, were left. I found this album in the Glasgow branch of Avalanche, years before it became Love Music. At college, with Juliana Hatfield’s Bed and Girls Fucking Shit Up by Lolita Storm constantly being swapped about in my portable CD player, I had a feeling I’d like this album. Secondhand! For a fiver! How could I not buy it? So I did. My little plastic Solo card, linked to my first bank account, always came in useful.

The cover art looked vaguely militaristic, and for good reason. The entire album, I’d discover on the bus trip back home, is a critique of high-tech weaponry and the politicians who misuse their power. For someone who watched the news and was constantly fed a visual diet of war and destruction, it made sense to me. The Gulf War. 9/11. Weapons of Mass Destruction. It was happening, would happen, couldn’t be stopped. Emotionally, I connected to the loudness, the din. To submit to an Atari Teenage Riot album is to force yourself around their prolonged assault on your ears. In a strange way, they declared war on their listeners. They wanted to do something, anything, to shake us awake. 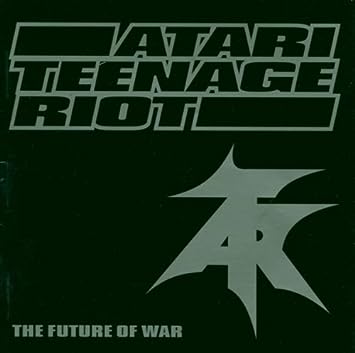 The Future Of War samples a lot of punk, metal, and hardcore bands. Bad Brains. Slayer. The Maids. The Users. I knew them all, being a student of everything alternative. When you’re that age, you’re searching for yourself in your favourite authors and bands. Something about Alec Empire, Hanin Elias, and Carl Crack reflected me back at me. The music, loud and aggressive, also contained in Hanin Elias one of the best voices in music ever. Hanin had a real talent for singing and screaming, sometimes in the same chorus. Certain female vocalists never fail me. Juliana Hatfield. Miss Kittin. Madonna. Toni Halliday. Annie. Shirley Manson. Siouxsie. Kate and Cindy from The B-52’s. Courtney Love. Kat Bjelland. Kim Gordon. Hanin Elias. They could read JavaScript For Dummies and I’d listen to every word, completely enraptured.

Song titles were never boring when it came to ATR. The Future Of War was no different. Fuck All. Sick To Death. Redefine The Enemy. Destroy 2000 Years of Culture.

Ah, yes. Destroy 2000 Years of Culture. My favourite song on the album is the one Hanin does least on, but it sounds like her voice is warped in the background of the chorus. Regardless, it could be Atari Teenage Riot’s most persistent statement of intent and the song that would give me a glimpse of the future, when they released their third album 60 Second Wipeout. If The Future of War is a musical Molotov to be hurled in the right direction, then 60 Second Wipeout is a massive weapon of destruction.

Atari Teenage Riot. The Future Of War. I’ve never wavered in my love for the band. Over the years, they’ve split, reformed, played unlistenable live gigs – but they released The Future of War and that will always count for something. Alec Empire, Carl Crack, and Hanin Elias came to me when I most needed them and I’ll never forget it.