Some records are defiantly underground. Others are absolutely mainstream. Then there’s Goo by Sonic Youth. Though released on a major label (Geffen), it looks and sounds like the work of artists hellbent on confusing the listener. Sonic Youth always had the reputation of confounding expectations; they were serious about what they did but had a good enough sense of humour that they could keep their credibility and come off as ironic any time they threatened to look like twattish posers. The line is thin indeed. By 1990, Sonic Youth were underground heroes, the sort of group venerated by any band looking to show off their taste. No self-respecting punk band said anything remotely negative about Sonic Youth, not if they wanted to keep their cool. And after years of working indie labels, being a living badge of honour for all the bands that trailed in their wake, the time finally came for Sonic Youth to embrace the mainstream, to springboard off the critical success of Daydream Nation and (my personal favourite) EVOL.

I imagine signing to Geffen would have been decried by fans, but Sonic Youth understood that there was no money in the underground. They weren’t a band as much as they were a badge of your coolness, an idea of credibility, a club you could belong to that barely anyone else might join. And yet…

Goo is probably their most ‘commercial album. Yes, Goo. An album with a song about Karen Carpenter and a track titled after a (quite good) James M. Cain book and a (very good) Joan Crawford movie.  But it yielded their only chart bothering ‘hit’ in the form of Kool Thing. Really, if I think of Sonic Youth, it’s this video I see in my brain television. Effortlessly fab, it really is a moment of complete koolness. This album allowed Sonic Youth an opportunity to rise up the ranks and tour with Neil Young. It put them on MTV and gave them visibility, something they’d always wanted for themselves and their songs. They were in Sassy Magazine because of Goo. This album was a big record for Sonic Youth, or as ‘big’ as they could possibly get in the 90s.

Something else that stands out is the cover art. The word ‘iconic’ is overused but the album cover of Goo is iconic. You see it on t-shirts, worn by popstars who don’t know what they’re wearing. Yes, Goo t-shirts with Raymond Pettibon’s design can be bought at Urban Outfitters. What a brave new world this is! Even if you don’t know this album, chances are you’ll have caught a glimpse of it at some point, a subliminal signal of Kool. 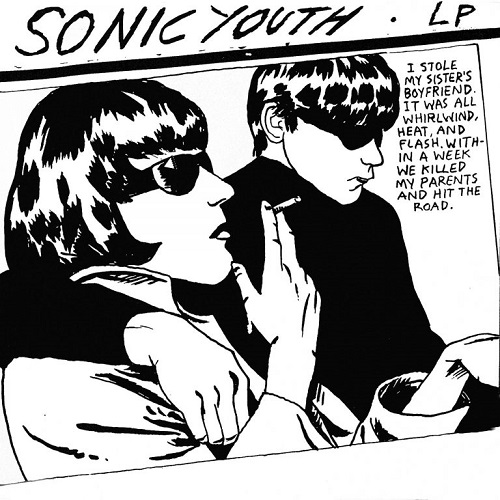 Sonic Youth’s next record Dirty is, in many ways, as good as Goo. But Goo felt very much like everything Sonic Youth had been working to captured in one brief brilliant blast. The 90s won’t happen again. Goo won’t happen again. Sonic Youth, now gone, exist in their work. And t-shirts in Urban Outfitters, which for a band from the underground, is quite an achievement.

NOTE: I’ve always been asked if my borrowed surname came from Madonna, but actually I stole it from Ciccone Youth, the Sonic Youth side project. They stole it from Madonna. Really, I’m about as Italian as a jar of Ragu!

1 thought on “Goo by Sonic Youth”