There are certain opinions enshrined in music journalism by music journalists. For the most part their thoughts remain unchallenged, unchanged. These edicts have been chipped into the rock of rock music itself. You know what I’m talking about, of course. Nevermind is the best Nirvana album. Blur won the battle, Oasis won the war. Sgt Pepper’s Lonely Hearts Club Band is a defining masterwork. Be Here Now killed Britpop. Whatever becomes collective opinion becomes the defining opinion.

One such opinion-as-fact is “Adore is the worst Smashing Pumpkins album.” It’s easy to accept this statement at face value. But it flies in the face of my good taste, because Adore is actually my favourite Smashing Pumpkins album. Or at least one favourite. Some days I’ll take the easy option and favour Mellon Collie, other days I might opt for the achingly underrated Machina. But the album I find myself returning to more than most is Adore. 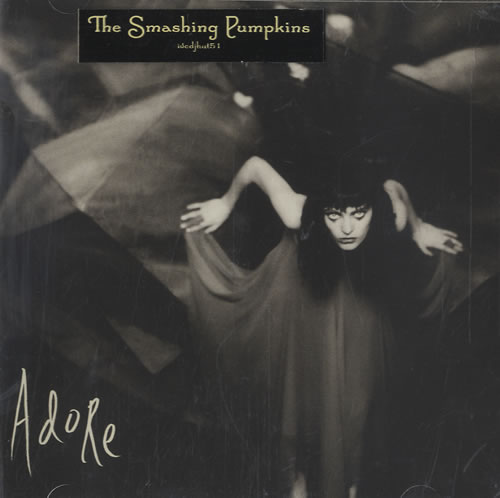 The Smashing Pumpkins during their imperial era were untouchable in both their lofty ambition and their pretentious presentation. It wasn’t always easy to be a fan, especially when reading or watching a Billy Corgan interview. But the one thing The Pumpkins had over their detractors, the one thing that could never be taken away from them was…the music. Billy Corgan was (and is) an extremely talented songwriter. He has a unique perspective. As someone who had to endure Bush, Stone Temple Pilots, and Silverchair, it’s better to stand out for your ideas than stand out for seemingly appropriating the ideas of others.

The Smashing Pumpkins aren’t just Billy Corgan, even if that’s what the world believes. James Iha, a stylish yet aloof presence, contributed his considerable talent to the music. He played guitar well and distinctively. D’Arcy Wretzky’s place in the band has often been disputed, which is always the way when a woman happens to be in a rock band. Regardless of where you sit or stand on the issue of D’Arcy’s contribution to the band, she was undoubtedly a powerful presence and easily the coolest member of the group. Jimmy Chamberlin, a ferociously talented drummer, had been the musical backbone of the band since their inception. From Gish to Mellon Collie, he was there, his drums anchoring the Pumpkins, making them sound like themselves regardless of what the others brought to the studio.

Then he was booted from the band.

Between Mellon Collie and Adore, 1995 and 1998, Jimmy’s drug intake apparently escalated. With tensions already apparent in the band, Jimmy was let go. Adore was to be the first Pumpkins album without him. Billy, however, had already decided to leap into an electronic direction. His initial efforts seemed promising enough. Eye, a lavish synth opus, was both catchy and crunchy. Fans were intrigued. Encouraged, Billy went into Adore. Both his band and his marriage were ready to crumble. All of these events made up the blood, bones, and guts of Adore.

I never knew any of this though. For me, in Scotland of the 90s, I simply accepted Adore as the logical next step for The Pumpkins. 1979 – from their previous album – had hinted at this direction, and being my favourite song ever (my favourite song ever changed every second week), I embraced Adore. It had a lot going for it. Gorgeous opulent artwork and photography announced each single as something rather different. The album’s monochromatic gothic beauty stood out among albums of the post-post-post grunge explosion. Everything looked great. But how did it sound? Amazing, actually. From “It’s you that I adore/you’ll always be my whore,” to the finale, Adore is challenging, messy, beautiful, and depressing. It has the best of this band and their excesses. But it isn’t boring. Regardless of what the alienated fan base said at the time, Adore is far from boring.

The promo video for Perfect is a sequel to 1979. A nice pay-off for fans. Mostly the same cast as before, it shows life for the characters whose carefree pranks and youthful spark have given way to a frazzled lifestyle, love affairs, and ultimately….death. It’s the perfect (sorry) visual summary of the band as they were at the peak of their imperial era. Bruised ballads for broken hearts, the track list of Adore is made up of songs for gloomy people in bedrooms. Other than the singles, the crowning moment of Adore is a song called Appels + Oranjes. Lyrically speaking, it’s possibly the finest Smashing Pumpkins song. “What if the silence let you dream? What if the air could let you breathe? What if the words would bring you here? What if this sound could bring you peace?” Both beautiful and bombastic, it flexes and flows, ebbs and peaks. It was Billy’s most oblique writing, but his most thrilling too. As a way to end Side A on the cassette edition of Adore, it’s – yes – perfect. The ending of Side B, the final track on Adore, is far less successful. Blank Page is a weak end to an otherwise accomplished record.

Adore, the great underrated Smashing Pumpkins album, isn’t really so underrated. Accepted lore states that Adore was the turning point in the band’s fortunes, being the album fans didn’t want from a band that looked and – more significantly – sounded out of place in the burgeoning Nu-Metal boom. Type ‘Smashing Pumpkins Adore’ in a search engine (even Yahoo will do) and you’ll undoubtedly discover plenty of other blogs and thinkpieces about how fans hate this album. Time, however, has been very kind to Adore. The public reception might have been lukewarm, but reviews weren’t terrible. A cursory glance at the Wikipedia entry for Adore confirms that as fact. A lot of reviews from 1998 were very favourable, actually. But myth is difficult to defeat. Reputation has a way of distracting people, taking away their attention. The general consenus, the one that matters, is that “Adore is the worst Smashing Pumpkins album.”

In the end, Adore wasn’t killed by music journalists – the fans did it themselves. Not this fan though. I’m more than happy to hurl Adore into my Hall Of Fame.