If you didn’t play Mortal Kombat II on the SNES, you didn’t play it at all. As much as I loved the Sega MegaDrive (or Genesis), it just didn’t port certain games very well. Mortal Kombat II for the SNES was the closest I’d get to play my favourite game ever at the arcade. We had an arcade up in Cumbernauld Town Centre; Bobby’s Amusements had a few arcade machines such as Shinobi and Pole Position, but it also had stab gangs and drunks. And that’s just my brother and sister. Anyway, Mortal Kombat II arrived and – gasp – it wouldn’t be censored like Mortal Kombat. Young kids want bloody violence and HOW DARE NINTENDO TAKE IT AWAY FROM US. But in the end low sales convinced them to keep the gore in MKII and an entire generation of kids ran home from school to spend time cutting, slicing, breaking, and snapping their opponents into pulpy messes.

For a period of time my entire life revolved around winning this video game tournament. My friends and I played MKII relentlessly. I spammed the shit out of Mileena’s Teleport Kick and availed myself of Shang Tsung’s useful ability to become every other character in the game. Scott went Scorpion. William went Jax. Brian went Reptile. Kenneth went Kitana. And we slaughtered each other in a gross variety of wonderful ways. That the game was scandalous didn’t occur to us. We had no idea there was such a fuss about the level of violence in it. We were too busy trying to make Shang Tsung morph into Kintaro and punch someone in half. 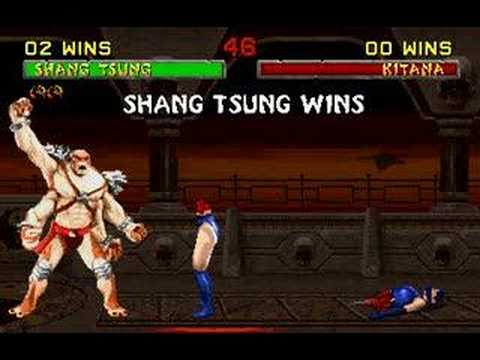 Then came the rumours. There were secret characters in the game. “I fought Noob,” William said in the manner of someone who knew the deep inner workings of time and space. “He’s a black outline.”

He was being truthful, of course. God bless secret characters. Then there was Jade, a green ninja with the ability to kick the shit out of everyone. That the internet wasn’t around ensured that no-one could easily check the veracity of these rumours. Some of them became very odd.

“There’s a Nudeality,” said one friend. “You can use it on the character to make them naked.”

Somehow the thought of making Reptile nude was more horrifying than decapitating him with a razor-tipped fan. “No,” I gasped. “That’s fucked up.”

“You can release Sonya Blade and she fights you in The Tournament stage.”

That was a lie.

“There’s a special Fatality called Bisexuality where you turn your opponent gay.”

We were uneducated about such things in 90s Scotland, though I laughed because the idea of it was hilarious. Instead of killing big boss Shao Khan, you could make him…gay?

“There’s a secret character called Skarlet who shouts ‘wanker’ if you lose a match.”

Years later, I downloaded Mortal Kombat II for my PS3 and to my pleasant surprise, I discovered that it still held up to repeat playing. I’ve always held the idea if game play is strong, then a game will endure decades after it first appeared on your old outdated consoles. Streets of Rage is one of those games. Street Fighter II is one of those games. Super Mario Bros. III. Sonic The Hedgehog. And Mortal Kombat II, of course. There have been ten games in the Mortal Kombat series, with an eleventh shortly on the way. Youngsters will be able to buy MK11 and play it with their friends on the PlayStation or Xbox the way we all did when it was Sega Vs Nintendo.

No matter how much things change, nothing really changes that much. Not even Mortal Kombat.