There are certain albums within a band’s canon when everything works. The formula is finally perfected. It may be the case that a band finally discover what makes them great, or it could be an addition to the group adds something that was previously mission. Whatever the reason, everything works and nothing can ever be the same again. Sonic Youth – a band whose formula is to fuck around with traditional formula – took a decade to perfect themselves into a sleek (as sleek as they could be) product. Finally, their brand of discordant dissonance backed up with oblique but interesting visuals that could get their videos played on 120 Minutes. I love their ’90s output, of course. Goo is a classic record; everything fit neatly into place for that album. But for me (and this is my blog so it has to be about me), their imperial record isn’t Goo or Daydream Nation. It isn’t even Sister or Dirty, though they come close.

For me, Evol is the one.

I found it in a record shop in Glasgow during my student days. Avalanche (now Love Music) was and still is a glorious jumble of second-hand CDs and old DVDs that won’t ever be sold. It’s a strange thing to be a hunter with no clue what you’re hunting. I knew I wanted something different, something…strange. I knew all about Sonic Youth, of course. Or as much as they would let me know. Sonic Youth albums can’t just be listened to like you’d listen to a Pixies or Nirvana record; you have to decode the music, ride the psychedelic assault.

Against all odds, I found Evol. Or maybe Evol found me. The cover art drew me towards it, making me choose it above all other albums in the shop. It had a real elegance but hinted at deeper, darker currents. Slowly, but surely, it pulled me in and I’ve never escaped.

On the way home, in the midst of a hissing rain storm, I popped Evol into my CD Walkman (ancient technology that allowed people to listen to music before WI-FI) and forgot everything. The rain could not touch me. I imagined this was what New York felt like for someone without a passport, the New York of my dreams, the cool (or Kool) New York where punk lived and thrived far away from The Ugliest Town In Britain where I was raised. *Yes, Cumbernauld really was voted Most Dismal Town and won awards for ugliest building two years in a row*. The album starts with Tom Violence, an ethereal garage punk song. So far, so familiar. The drums in particular make Tom Violence sound so…well, violent. Evol is Steve Shelley’s first album with Sonic Youth – and suddenly, the pieces fit together and the definitive lineup came about. Of course I didn’t know this at the time. On this record, Steve’s contribution is markedly significant and every bit as essential as the other members of the band. Shadow of a Doubt, the second song on the album, is definitely a ‘rain song’, the sort that matched perfectly the downpour outside my headphones. Starpower, the album’s only single, is a comment on celebrity backed by the erosive guitar sound of Kim Gordon. Her vocals sound distant, bored. It works perfectly.

Secret Girls is another hazy pop song in the vein of Shadow of a Doubt, gossamer dreamlike guitars back a soliloquy from Kim Gordon about being a ‘girl in a band’, one of the constant comments she had to hear over and over again from interviewers throughout the years, something to be endured whenever the band went on the promotional trail. 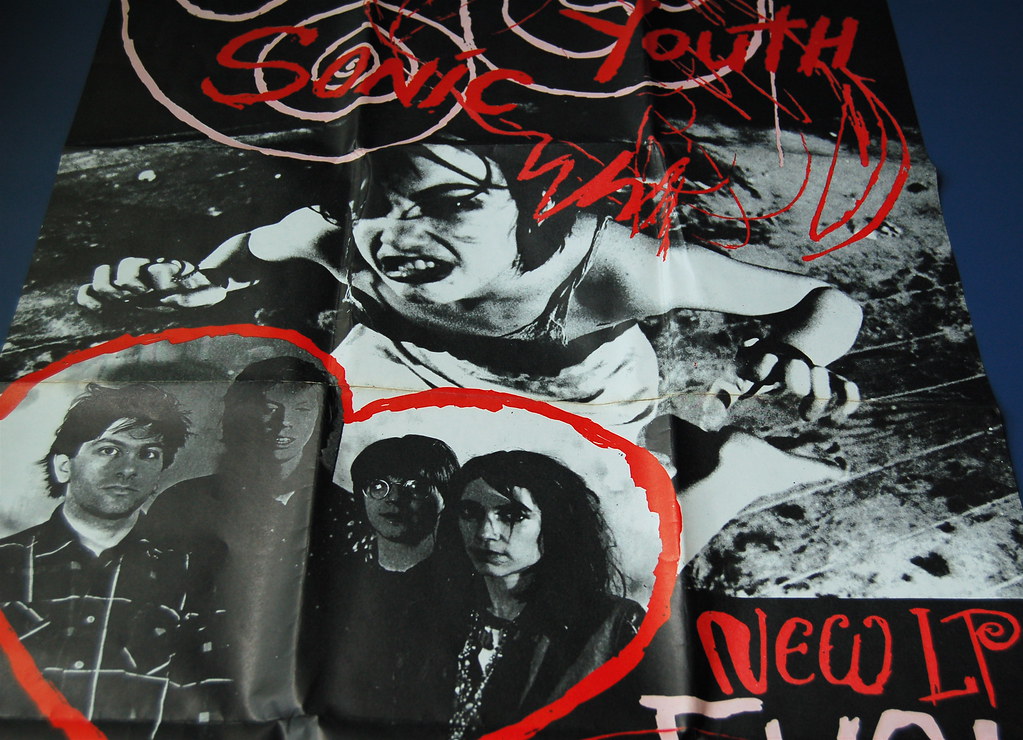 The best moment of Evol carried me home in the storm. It was the last song Expressway To Yr. Skull, listed on the album as Madonna, Sean, and Me. Allegedly feted by Neil Young as the greatest guitar song ever written, he’s possibly right.

By the time I got back home, the storm was already starting to wind down. Honestly, I wanted to dance in the rain like Gene Kelly, but I dance like The Little Mermaid on linoleum. Instead, I clumped along the streets clumsily. Soaked denim jeans, a not-so-waterproof raincoat, and boots not made by Dr Marten made it difficult to be dignified in the downpour. But I didn’t care. My CD Walkman was dry and I’d just discovered something honestly lifechanging. Evol is part of my musical DNA. I would say I always go back to Evol, but the truth is…I’ve never left it.

One response to “Evol by Sonic Youth”